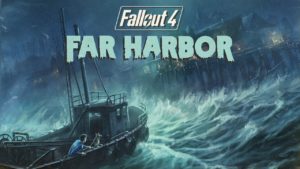 Fallout 4: Far Harbor will is the 1st major game expansion to be released for the Fallout 4 game. It will be set on a mysterious island off the coats of Maine; the island will be the largest landmass ever created for an add-on ever created by Bethesda Softworks.

The lead character Nick Valentine is following a case from his own detective agency has gone to the island in search of a young woman who has gone missing. On the island he becomes heavily involved in the growing conflicts between the islands inhabitants (the secret colony of synths, the Children of Atom, and the local townspeople).

The landscape for the game will be more feral than before and will have much higher levels of radiation, which will spur up all kinds of deadly creatures than those seen in the main game; expect to see lethal creatures and dungeons scattered around the landscape ready to be explored.

As you progress through the game, you undertake faction quests, collect items that will enable you to grow more powerful and build more settlements.